Dr. Melissa Lafferty is a veterinarian at Gentle Doctor Animal Hospital with a passion for surgical treatment and supporting rescue groups in the excellent work they do. 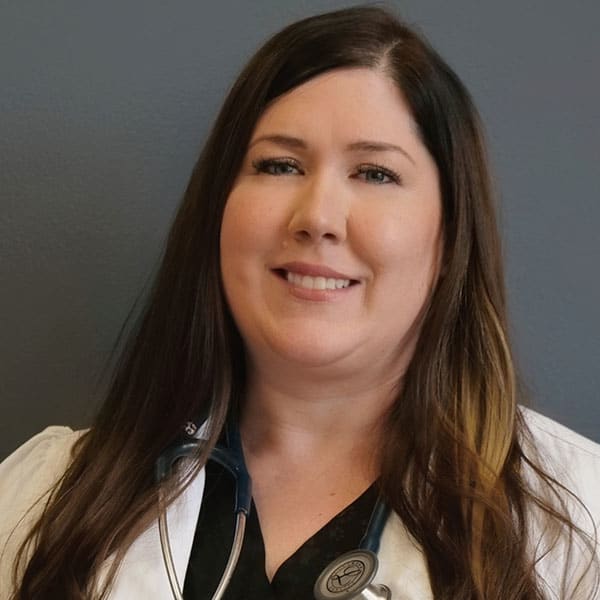 Dr. Melissa Lafferty was born in Akron, Ohio and moved to St. Charles, Missouri with her family when she was just six years old. Having always had a love for animals, Santa gave her a kitten for her first Christmas in Missouri. That was the first pet Dr. Melissa ever owned, besides the frogs, turtles and birds she nursed to health from outside her home. Her beautiful little calico kitten was named Tiffany, because that was her favorite pop star at the time, but eventually they shortened her name to “Tiffy”. Hilariously enough for a future vet, Dr. Melissa’s mom has always been terrified of animals, and it took two years before her mom was brave enough to be in the same room with Tiffy.

Dr. Melissa attended high school right here in St. Charles County at Francis Howell High School and her family still lives in the area. Before Dr. Melissa attended veterinary school at the University of Missouri-Columbia, she was a veterinary technician in Ashland, Missouri just outside of Columbia. Having a strong interest in science, animals, and medicine, Dr. Melissa decided that becoming a Veterinarian would enable her to pursue all of these interests. Dr. Melissa graduated from The University of Missouri-Columbia College of Veterinary Medicine in 2006 and has been an integral part of the team here at Gentle Doctor ever since.

In addition to the dogs and cats, Dr. Melissa loves interacting with the families she meets every day in her job. She also loves the challenge of never knowing what she may see on any given day. Due to the ever evolving advances in veterinary medicine Dr. Melissa expands her knowledge by frequently attending continue education events and yearly conferences. Dr. Melissa enjoys performing veterinary surgery and often works with rescue groups.

She currently lives in Lake Saint Louis with her two children (Braxton and Cora) and they currently share their home with two dogs and two cats. Colt is a large Husky mix that was found as a tiny puppy in Indianapolis, Indiana and he has all the energy of a new born colt. Lulu, a small Long Haired Chihuahua, is Cora’s “partner in crime” and the two are rarely seen apart. The two dogs are the best of friends who love to wrestle each other, even though Colt has the complete advantage in size outweighing Lulu by close to 10 times. Their cats, Bob and Cinnamon, who look nothing alike despite being littermates, were born at Gentle Doctor after their mom was found as a very sick stray. Dr. Melissa and her kids fostered the mother cat and her other kittens until they were old enough and healthy enough to be adopted out. Dr. Melissa and her family enjoy finding new restaurants, movies, cooking, reading and hiking with their dogs.

Gentle Doctor Animal Hospital is accepting new patients! Our experienced vets are passionate about the health of companion animals in O’Fallon and surrounding communities. Get in touch today to book your pet's first appointment.

Send us a message online.